So, after completing the v0.2 Detailed Design I turned my attention to the BOM. Since this is still development prototype, I wanted to source components which can be bread boarded using a prototype shield and mini-breadboard. The previous version of the *Holoseat* was built using this approach, and I find it creates a usable, near finished product while maintaining the flexibility of bench top breadboarding. And, since my soldering skills leave something to be desired, I wanted to find a pre-assembled prototype shield (which, unfortunately ruled out Adafruit’s Prototype Shield).

Since I am an Amazon Prime member, I often turn to Amazon for my initial search for almost everything. And, it should come as no surprise that there are plenty of Arduino related products on Amazon. As I was searching for prototype shields, I quickly came across this one (see image below) from SainSmart. It looked like a pretty good deal. It’s a good price and includes jumper wires for use with the breadboard. 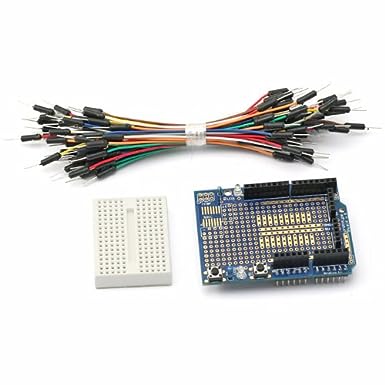 As I wrapped up the BOM and I continued looking around Amazon, I came across this Intro to Arduino Kit which includes a Leonardo board (see the Detailed Design for info on why we are moving to the Leonardo). Now this was very tempting. It includes pretty much everything from the BOM plus extra stuff for later experimentation, and at a nearly $20 savings over ordering components individually. Needless to say, I was pretty excited. But, I am thorough shopper, and truth be told I was not familiar with SainSmart. So, I decided to do some Googling to make sure this was really as good a deal as it seems. Boy am I glad I did.

At first, I didn’t find much info one way or another. There were a couple of somewhat negative forum posts which I didn’t find very helpful on their own. But then I came across this thread on Reddit. It looks like SainSmart is not being a good OSHW citizen (note, I have nothing against cloners, but I do have a problem with people not following license and trademark requirements, let alone changing components without proper documentation). Combined with the few bits I could gather from the other forum posts, I just cannot justify going with SainSmart for any components until I hear better news about their behavior with regards to OSHW.

So, back to Amazon and Google I went looking for a prototype shield. The good news is the Arduino team has an assembled shield which Amazon sells. Plus, there is a mini-breadboard at Amazon which looks like it should fit on the shield. A few quick adjustments to the Bill of Materials, and it was done. Now it’s time to order parts. Woot!